From Starmus IV to Starmus V 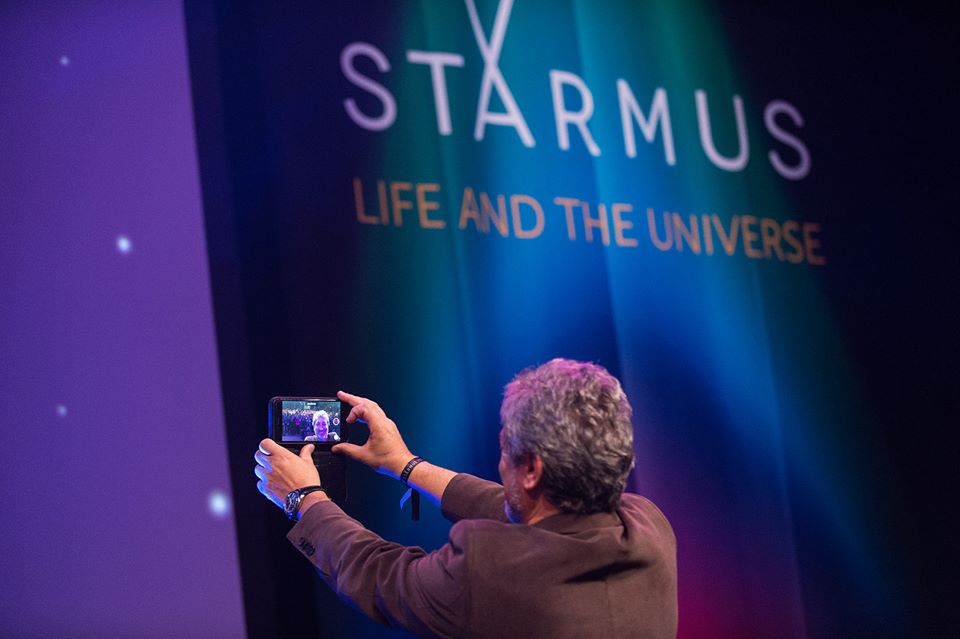 2017 is a special year for us. The name “STARMUS” and the idea behind this unique event is 10 years old!

Starmus was encouraged, blessed and powered by Brian May, Alexei Leonov and Stephen Hawking. Their spirit is lying in the foundations of this festival.

Brian May symbolises arts, music, astronomy and the mysterious bridges between them. Alexei Leonov symbolises space exploration, adventure and the arts (he is a well-known painter). And Stephen Hawking symbolises fundamental science, science communication and the power of the human brain. These three personalities represent the best of the human race….The most talented, creative, strong and courageous beings of the human race. STARMUS has connected them and created “The Stephen Hawking Medal for Science Communication”. This is a solid and historical achievement. It was meant to happen. The first STARMUS festival was dedicated to Yuri Gagarin and inaugurated by Neil Armstrong. Just think about this…

I have to admit that Starmus I and IV were the most difficult festivals in terms of organisation and logistics. Please note that we had only 8 months to organise the Starmus IV festival. It was a tremendous amount of work, full of tension, last-minute decisions etc…but it got done!

I would like to share a few things with you, about the 4th festival held in Trondheim – Norway´s scientific capital.

Starmus IV was very special and different from the previous three editions, which were organised in the Canaries.
Despite the many differences and difficulties, we have preserved the well-known ”Starmus atmosphere”. This unique “atmosphere” has been praised by many scientists and artists such as Neil Armstrong, Stephen Hawking, Elizabeth Blackburn, Brian Eno, Emmanuelle Charpentier, Joseph Stiglitz, Hans Zimmer, Katharine Hayhoe, Sarah Brightman, Oliver Stone, Rick Wakeman, Jill Tarter, Neil deGrasse Tyson, Buzz Aldrin, Brian Cox, Jean-Michel Jarre and many others.

I want to thank everyone in Trondheim and Norway who supported and worked with us to make the Starmus IV festival so successful.

My very special thanks go to Edvard Moser and May-Britt Moser. We will never forget their unconditional support! Then there was our amazing army in Trondheim – Rita, Karl, Anne, Hermann, Eirik…and all of those who gave a “green” light to all sorts of large and small decisions, as well as the Minister of Science and Education, the Rector of NTNU, the Mayor of Trondheim, The County Mayor, and all of our excellent sponsors…The festival would not have been made possible without these people, and of course our STARMUS team!

These are the headlines of Starmus IV:

– BBC Radio4´s panel with Brian Cox and the Astronauts.

– The Panel with 11 Nobel laureates introduced by the EC Commissioner for Research, Science and Innovation, Carlos Moedas.

– The new lecture of Stephen Hawking titled “ The Future of Humanity”.

– The European Premiere of the film “The Spacewalker” about Alexei Leonov.

– The Starmus Side Program in Trondheim with 1000s of children and students.

– The exceptional Science-Music performances by May-Britt Moser (Into Whiteness) and Brian Greene (Icarus At the Edge of Time).

It was a very successful festival!

Starmus V is behind the door!

I am happy to inform you that the 5th Starmus Festival is planned to be held in 2019. We will make an official announcement this year.

You have time to speculate about the location of Starmus V, topics, titles, line-up, etc. Good luck!