Stephen Hawking medal recognizes Jim Al-Khalili, Hans Zimmer and the documentary film Particle Fever to be a model for disclosure of science in their respective areas 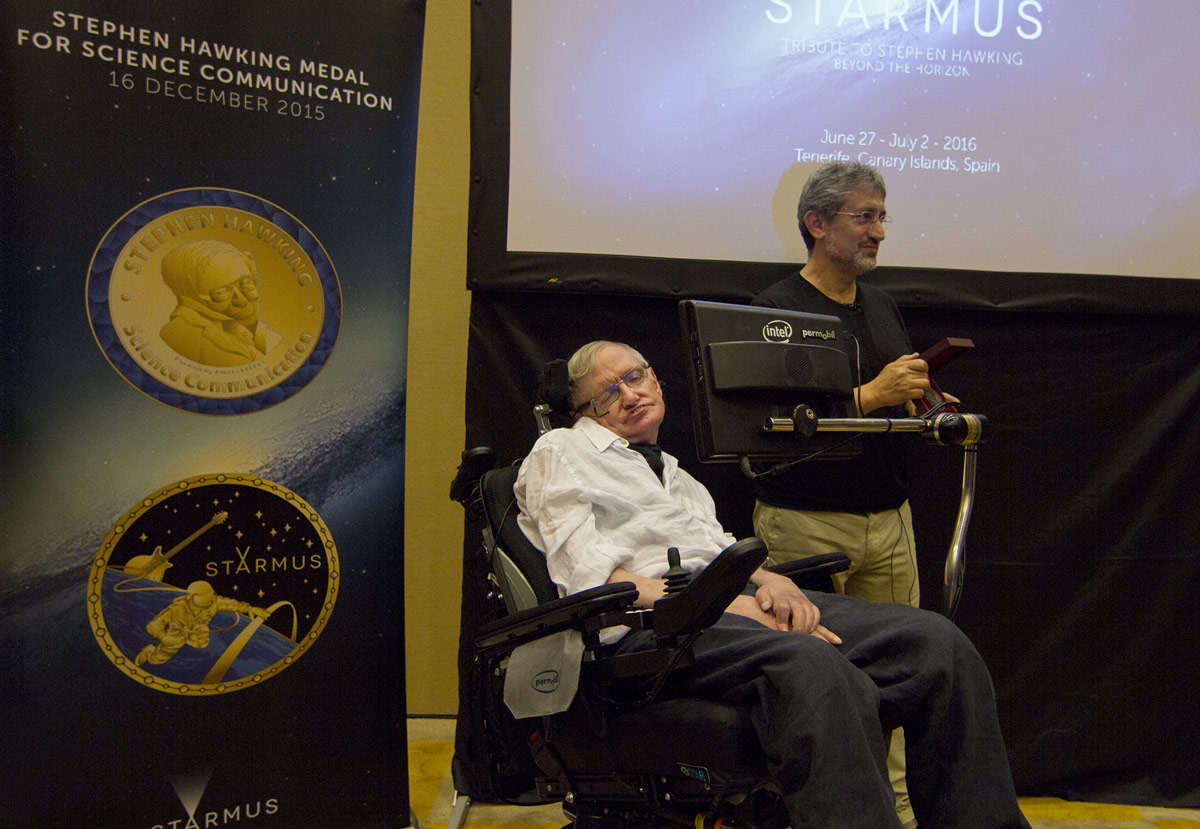 Tenerife, June 16th 2016. To bring science to the people and to position it in our daily lives. With this mission, in late 2015, the Stephen Hawking Medal of Science was born to honor individuals and entities that had contributed, in an eminent way, to popularizing science in the category of Science, Art and Film. Sponsored by Starmus and by astrophysicist and Professor Stephen Hawking, the medal awards in this first edition is for Jim Al-Khalili, physicist, writer and broadcaster; Hans Zimmer, film and television composer and the documentary film “Particle Fever”.

Professor Stephen Hawking announced today in a press conference the name of the three 2016 edition winners: “In collaboration with the Starmus festival here in Tenerife, I am pleased to announce the first recipients of the Stephen Hawking Medal, for Science Communication. In this special inaugural year of the awards, I have been invited to personally select the awardees. The winners have made outstanding contributions in the articulation and portrayal of science to the public, within the three categories of science, art, and film”.

According to Garik Israelian’s, astrophysicist, founder and director of Starmus: “these three medals enclose a fundamental message: the importance of disseminating Science and all its achievements to the general public and to inspire too, young people to show interest in the world of Science. The winners have not only understood the dimension of this challenge, but also have led in different disciplines, the transmission and development of knowledge, beating the barriers between science and communication”

In Science category, the medal has been awarded to Jim Al-Khalili, physicist, writer and broadcaster, “for his treatment of complex physics concepts through science documentaries, most recently, The Secrets of Quantum Physics”.

The medal of Arts has been awarded to Hans Zimmer, composer of film soundtracks, “for the music to Interstellar, a science-fiction film with credible physics, thanks to science consultant Professor Kip Thorne, portraying the journey through a black hole”.

The documentary film, “Particle Fever”, directed by Mark Levinson and produced by David E. Kaplan, Mark Levinson, Andrea Miller and Carla Solomon, is the winner in the category of Film, “for insights into the life and work of physicists at the Large Hadron Collider at CERN. Culminating in the discovery of the Higgs Boson”.

The ceremony award will take place in Hotel Pirámide Arona (Tenerife, Canary Islands) on Wednesday, June 29th 2016, from 15:00’ to 16:00’ P.M., where Professor Stephen Hawking will be accompanied by Brian May, Alexei Leonov and Garik Israelian, participants also of this 2016 edition of Starmus Festival.

Jim Al-Khalili (Irak, 1962) physicist, author and broadcaster. PhD in nuclear physics from the University of Surrey (United Kingdom, 1989) is currently Professor of Theoretical Physics and Chair in the Public Engagement in Science at the same institution. He has published more than one hundred papers on nuclear reaction theory, quantum mechanics and quantum biology. He has presented a number of science programs on BBC television and is a frequent commentator about science in other British media. He is also author of a dozen books on history of science and science diffusion. Al-Khalili has received many awards, amongst them, the Medal of the Royal Society Michael Faraday, the Institute of Physics Kelvin, and the Honourable OBE Queen “for his services to Science”.

Hans Zimmer (Germany, 1957) German film soundtrack composer, has been a pioneer in the integration of classical and electronic music with traditional orchestral arrangements. Since the 1980s, he has composed music for over 150 films, amongst them, ‘Thelma and Louise’, ‘Gladiator’, ‘The Prince of Egypt’ ‘The Da Vinci Code’, ‘Rain Man’ and ‘The Dark Knight’. Zimmer has been nominated for the Academy Award, ten times; the last one in 2014 (Interstellar, Christopher Nolan), winning in 1994 the aforementioned award for Best Original Score.

Along his career Hans Zimmer has received several honors, among them four Grammy Awards, three Classical BRIT Awards, two Golden Globes, an Academy Award and a Tony Award. In 2003, the American Society of Composers, Authors and Publishers awarded the prestigious Henry Mancini Award for his entire career, recognizing his effort and creativity. Zimmer has a star on the Hollywood Walk of Fame, and in 2014 was awarded by the Zurich Film Festival. Recently just completed his first European tour in 32 cities.

Mark Levinson (United States, 1956) physicist and film director. Levinson earned a Bachelor of Science degree at Brown University. He earned his Ph.D in Physics in 1983 at the University of California, Berkeley. Thereafter, he moved into a career in film where he first specialized in the post-production writing and recording of dialogue (ADR). He has worked with prestigious film directors such as Anthony Minghella and Francis Coppola, and with some of the most current talented actors of the film industry; amongst them Ralph Fiennes, Jude Law, Matt Damon and Juliette Binoche. He is the writer, producer and director of the documentary film “Prisoner of Time”, which examines the lives of former Russian dissident artists after the collapse of the Soviet Union. The film was acclaimed during its premiere at the Moscow International Film Festival. He recently directed and co-produced the award-winning documentary “Particle Fever” which follows the story of the discovery of the Higgs boson. The film tells the story of six brilliant scientists trying to unravel the mysteries of the universe, documenting the successes and failures of one of the most inspiring and significant scientific breakthroughs of our time. He wanted to show science in a realistic and appealing way. He is currently working on adapting the acclaimed novel by Richard Powers, “The Gold Bug Variations”.

David E. Kaplan (United States, 1968), Professor of Particle Physics at Johns Hopkins University. He received his PhD from the University of Washington in 1999 and held postdoctoral positions at the University of Chicago/Argonne National Lab and the Stanford Linear Accelerator Center. Kaplan’s research addresses possible extensions to the standard model of particle physics and he spends much of his time either building supersymmetric or other models, coming up with new ideas to explain dark matter, or developing new techniques for discovering physics beyond the standard model. Kaplan has been named an Outstanding Junior Investigator by the Department of Energy, a Kavli Frontiers Fellow of the National Academy of Sciences, and a Alfred P. Sloan Fellow. He has also produced the documentary film, Particle Fever, for which he has won a DuPont Journalism Award, and many other accolades. In his spare time, he hosts the In Theory video for Quanta Magazine.

Under the name of the greatest scientist of the 20th and early 21st centuries, Stephen Hawking, and sponsored by Starmus, the most ambitious Science festival of all time, the Stephen Hawking Science Medal is a prestigious award which recognizes the merit of popular science on an international level.

The design of the medal used a portrait of Professor Hawking by cosmonaut Alexei Leonov, the first man to perform a spacewalk and member of the Advisory Council Starmus since its first edition. The other side combines the image of Brian May of the first spacewalk and the iconic guitar – the “Red Special” – to demonstrate music, another major component of the Starmus Festival.

Starmus Festival was born with the aim of making the most universal science and art accessible to the public. The Festival brings together the brightest minds from astronomy, prominent space travelers, astrophysicists and stargazers with tech business leaders and creative industries thinkers to debate the future of humanity.

After two ground-breaking editions in 2011 and 2014, gathering together the most important representatives of these fields, such as the astronaut Neil Armstrong and Professor Stephen Hawking. In this new edition, the Starmus III program will include the participation of eleven Nobel laureates in disciplines such as Physics, Chemistry, Medicine, Astronomy, along with other guests of great prestige.